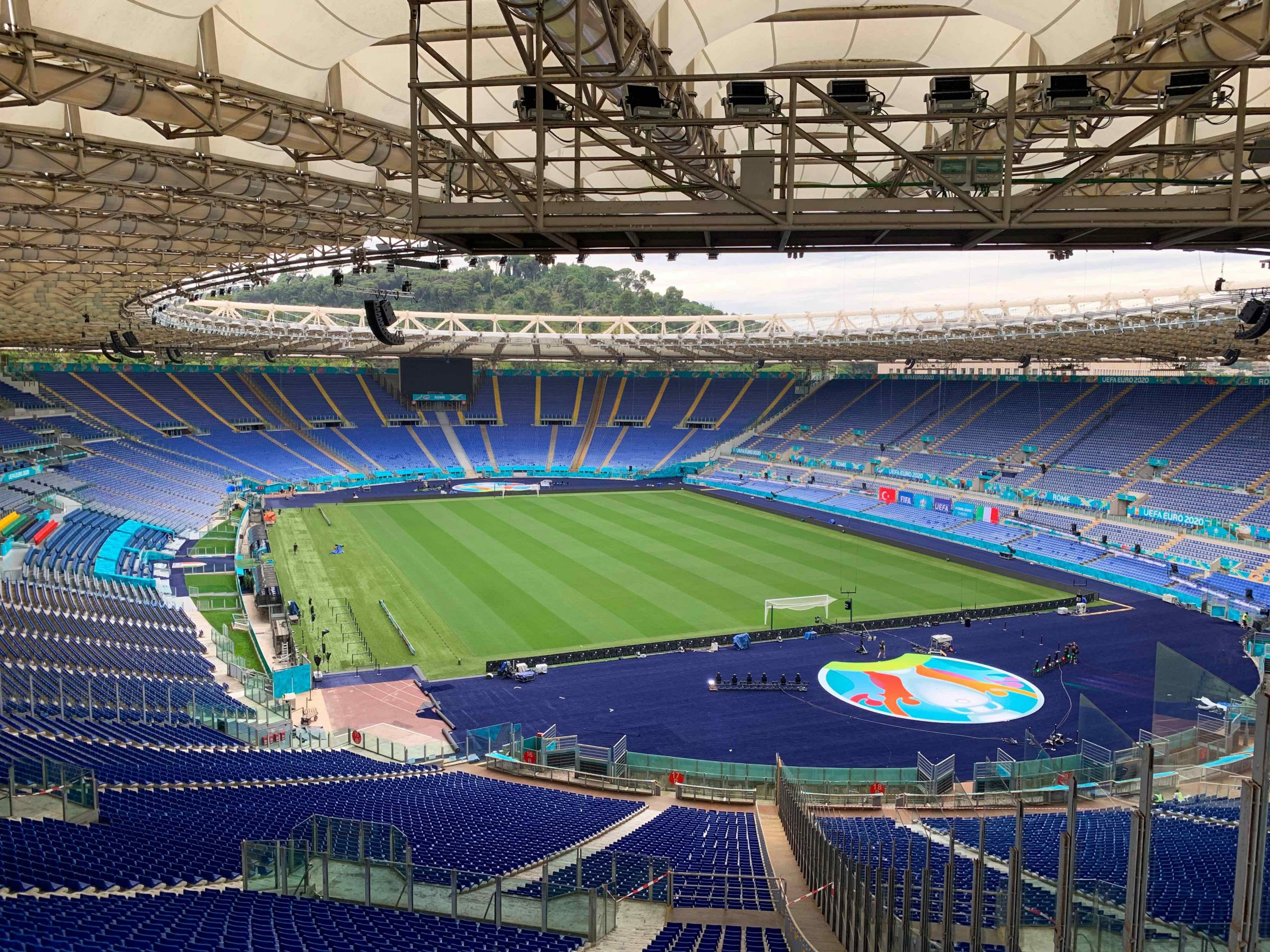 31 days of tournament, 24 teams, 51 games played, 1 winner. These are some of the numbers of Euro 2020, but they are not the ones that matter when you are in charge of the audio playback distribution for the opening ceremony of the event. In this case the number you are looking at is 12, which is the total amount of minutes of show broadcasted worldwide. Not a long show, but also no space for failure and, most important, no time to recover or change in case something fails.

This was the main challenge that Luca Giaroli, Product Manager at DirectOut, had to face when collecting and distributing the audio feeds of the playback tracks and live microphones used during the performance.

“The show lasted from 8:35 until 8:47PM. Since you can’t fail and you have no time for recovery if something happens, you need to have a redundant plan in place to avoid audio interruption”, comments Luca. “If possible, the redundancy method needs to be automatic so that the show doesn’t get interrupted not even for a sample. Or in case of multiple simultaneous failures, manual actions like changing a cable, or recalling a snapshot could be required and they are also acceptable if no automatic option could be planned.”

“The show lasted from 8:35 until 8:47PM. Since you can’t fail and you have no time for recovery if something happens, you need to have a redundant plan in place to avoid audio interruption”, comments Luca. “If possible, the redundancy method needs to be automatic so that the show doesn’t get interrupted not even for a sample. Or in case of multiple simultaneous failures, manual actions like changing a cable, or recalling a snapshot could be required and they are also acceptable if no automatic option could be planned.”

During this kind of shows multiple actors are usually involved and there’s always a very thin line that divides political issues from technical ones: where does the responsibility of someone end and where does the one of another start? With these thoughts in mind, let’s take a look at the redundancy plan which was actually put in place and how PRODIGY.MP played a crucial role in it.

From a pure audio perspective, the show included a mix of playback tracks and live contributions. Dancers, pyros and lights were performing at the rhythm of music, while two famous Italian soccer players shouted the opening words welcoming everybody to Euro 2020 and opening the way to the notes of the “Nessun Dorma” sang live by maestro Andrea Bocelli. 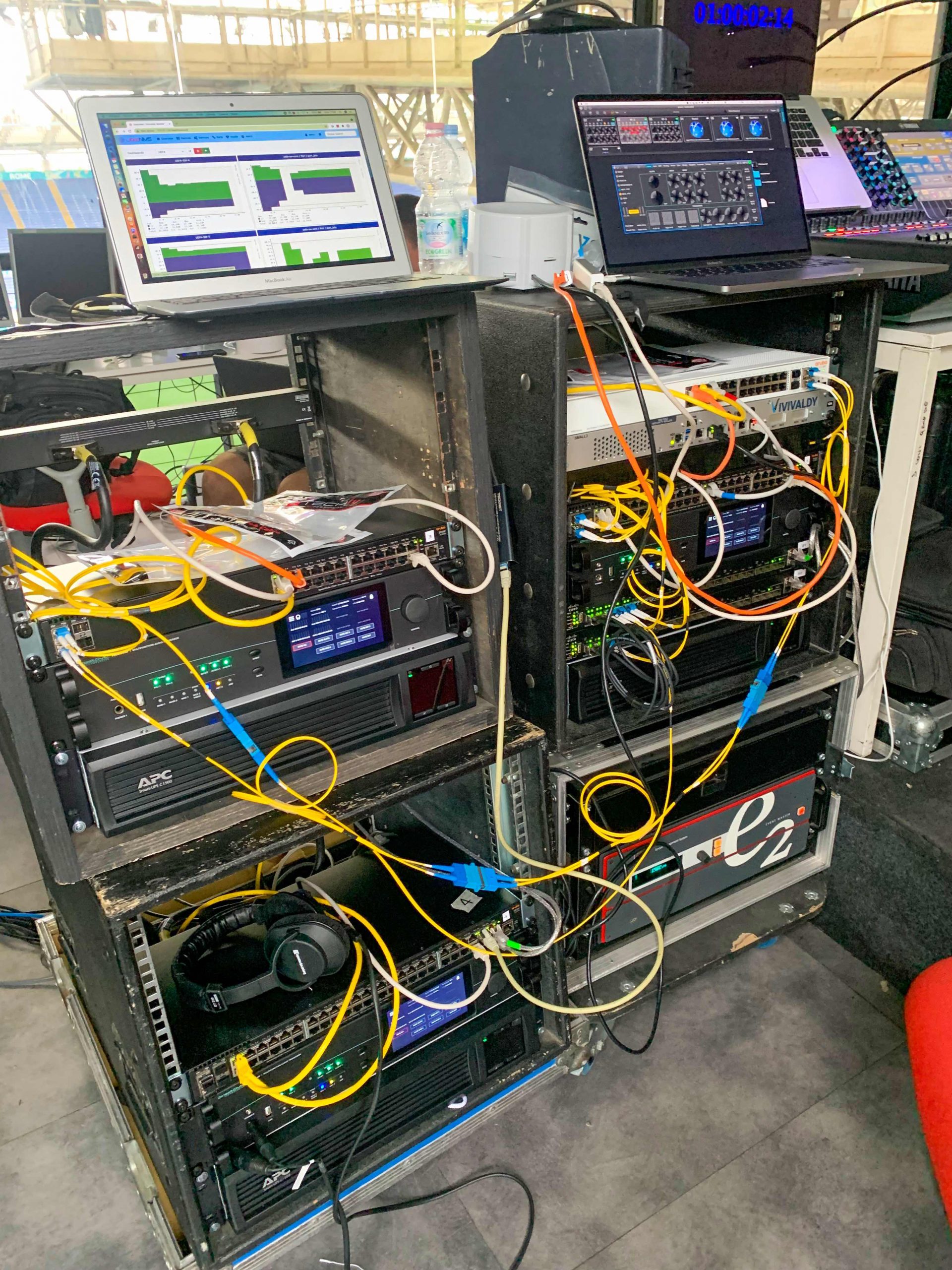 Arturo Pellegrini, a well-known Italian sound engineer, was in charge of managing the playback rig and mix it with the live audio coming from the field, while Luca Giaroli was responsible for gathering the feeds from the console and distributing the signals towards the PA and broadcast rigs which laid under UEFA’s responsibility.

The control room for playbacks, lights and pyros was located on the stands of the Olympic Stadium in Rome, while two fibers were laid down to connect it with the field level where the PA and broadcast teams were operating. First level of redundancy was achieved by creating a primary and secondary Dante network for the audio transmission.

“The signals traveling from the control room towards the field were passing through two fibers and two switches on the field level which were feeding the PA and the broadcast” says Luca. “To increase redundancy and divide responsibilities, we had to divide their Dante network from the one we were using. To achieve this, we used a PRODIGY.MP.” 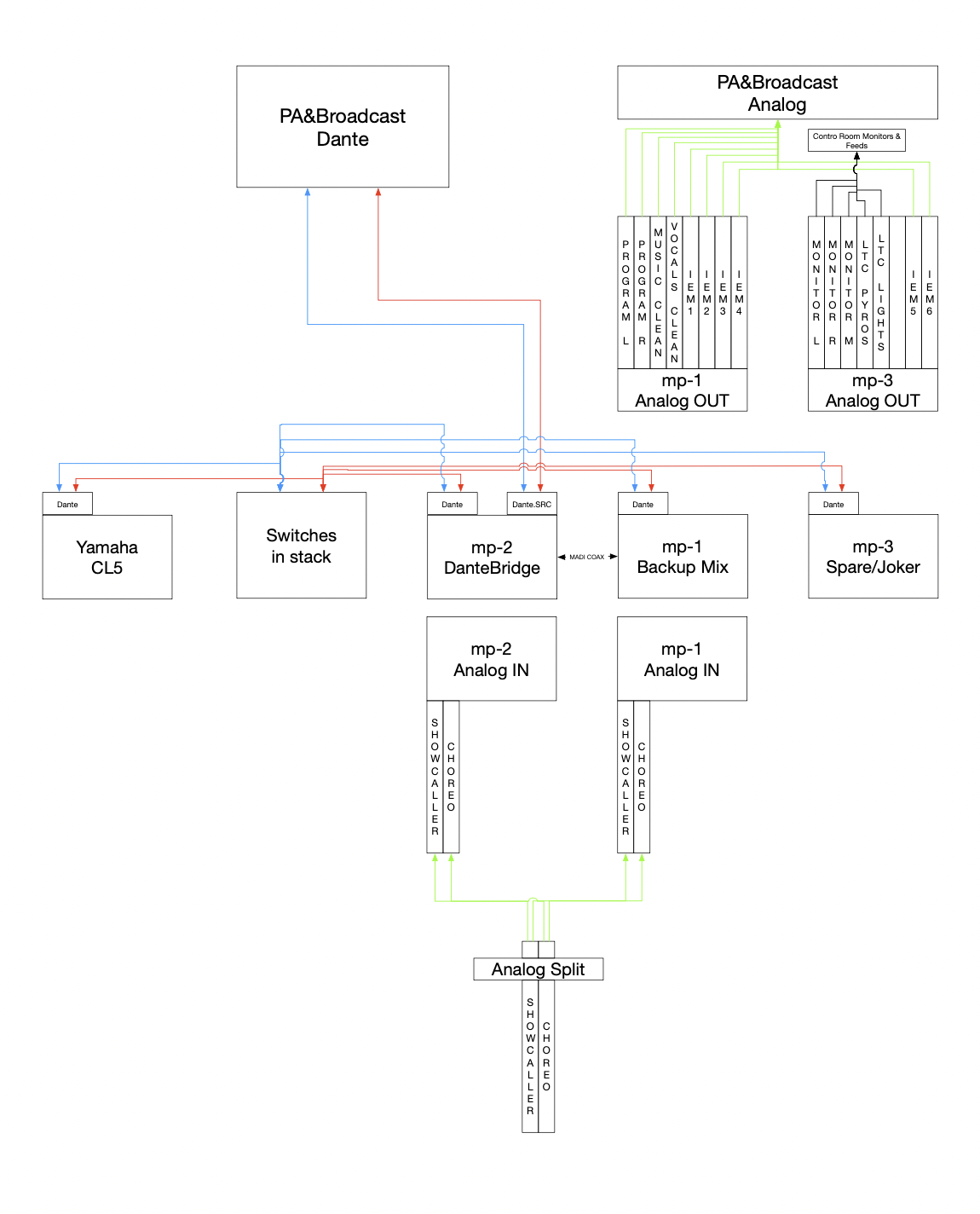 PRODIGY.MP hosted two DANTE.IOs, each of handling 64 audio channels. One of the two modules included the HD SRC option. The DANTE.SRC.IO was entirely dedicated and controlled by UEFA while the “playback team” had no access to their Dante network instance. Interfacing between the two independent audio networks was handled by the internal routing matrix of PRODIGY.MP. Deploying HD SRC, all feeds between  PRODIGY.MP and the UEFA Dante network were interfaced seamlessly while granting clock independent operation of the UEFA audio network.

The UEFA engineer on the field was receiving the program left and right coming from the playback console, but also clean music and vocals so that he could adjust them for the PA. RF Transmitters and Receivers were also located at the field level and the Dante networks allowed those signals to travel to and from the control room collecting the radio-microphones signals on the field and bringing back down the audio mix for the in-ear monitors. All the feeds coming from the control room[CM1]  via Dante were backed up using analog signals provided by a second PRODIGY.MP, while a third device functioned as a spare unit.

“The PRODIGY units located inside the control room were not only used to exchange audio back and forth with the field but were also managing all the monitoring feeds and the microphone signals needed inside the control room in order to run the show” adds Luca. “These included a left and right monitoring feed for Arturo, a mono one for all the other technicians and the LTC generated by ProTools which was sent to pyros and lights.”

The two microphones used by the choreographer and the “show-caller” were input to PRODIGY.MP after an analog split and then passed through the playback console before reaching the field.

"Input Manager of PRODIGY.MP is really a life-saver feature"

PRODIGY.MP also functioned as backup console in case of failure of the main one collecting, mixing and distributing the radio-microphones coming from the field, the signals coming from ProTools and the two microphones mentioned above.

All three PRODIGY.MPs were connected to the same Dante network through different switches and the switches were configured and connected in stack with V-LANs in order to manage Dante Primary and Secondary and to secure the Dante networks even in case of failure of a switch.

Signals going from the PRODIGY.MPs towards Dante were not sourced directly from analog or Dante inside the device but were passing by Input Managers to increase the level of redundancy.

Luca Giaroli describes the Input Manager as “a great feature of PRODIGY.MP consisting of a DSP block which automatically chooses between six different hardware inputs and sends a valid signal towards a logical DSP output based on the availability of such inputs and their priority. It checks locking and level coherence and if a higher input fails the PRODIGY.MP switches automatically to the next. This is really a life-saver feature.” 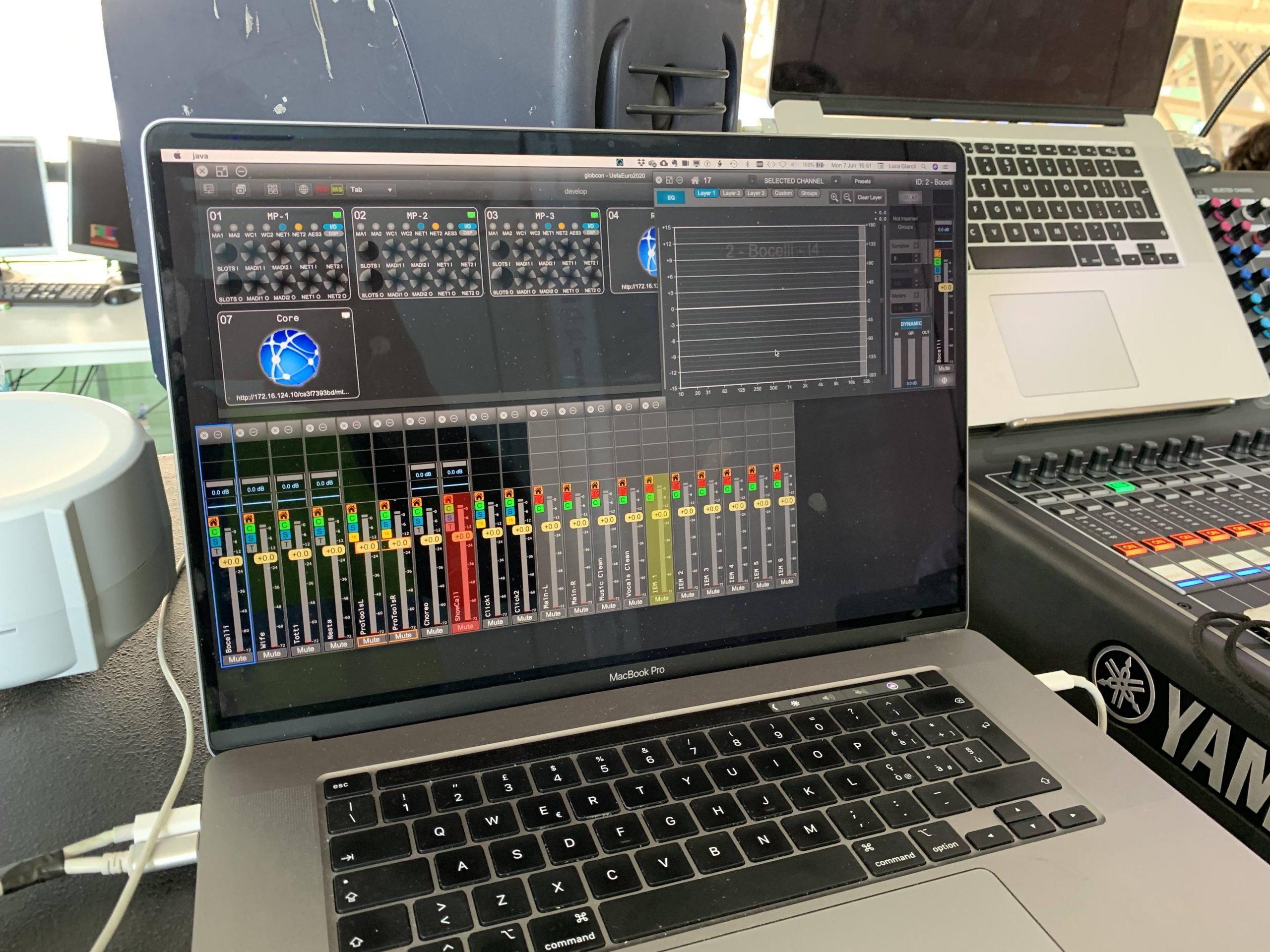 PRODIGY.MP also functioned as redundancy switch for the ProTools playback rig. Dante Virtual Soundcard (DVS) was chosen to send the tracks coming from ProTools running on two MacBook Pros and going towards the playback console. 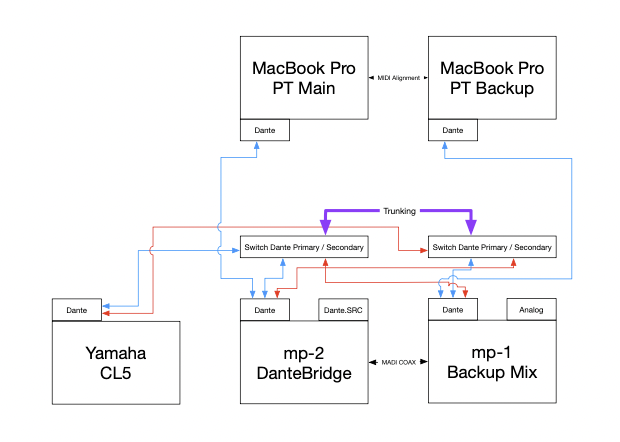 The EARS function inside PRODIGY was used to grant automatic switching towards the backup ProTools in case of failure of the first one. In order to overcome the fact that DVS only supports one network at the time and doesn’t offer Dante Primary and Secondary, the two MacBook Pros were passing through a pair of PRODIGY.MPs which then re-distribute the result of EARS both with Dante Primary and Secondary.

“Enhanced Automatic Redundancy Switching grants seamless switchover of audio sources in just one sample” says Giaroli, “and you do not even miss that sample thanks to the internal buffer added by the device which doesn’t impact at all on the overall latency but permits glitch-less switching in case of failure”.

Nothing failed during the ceremony so none of these mechanisms had to be triggered, but the rig was ready to react in case of single or multiple failures. Only 12 minutes of show, but plenty of redundancy[CM1]  mechanisms were in place thanks to PRODIGY.MP, which showed all its power as a multifunction processor.