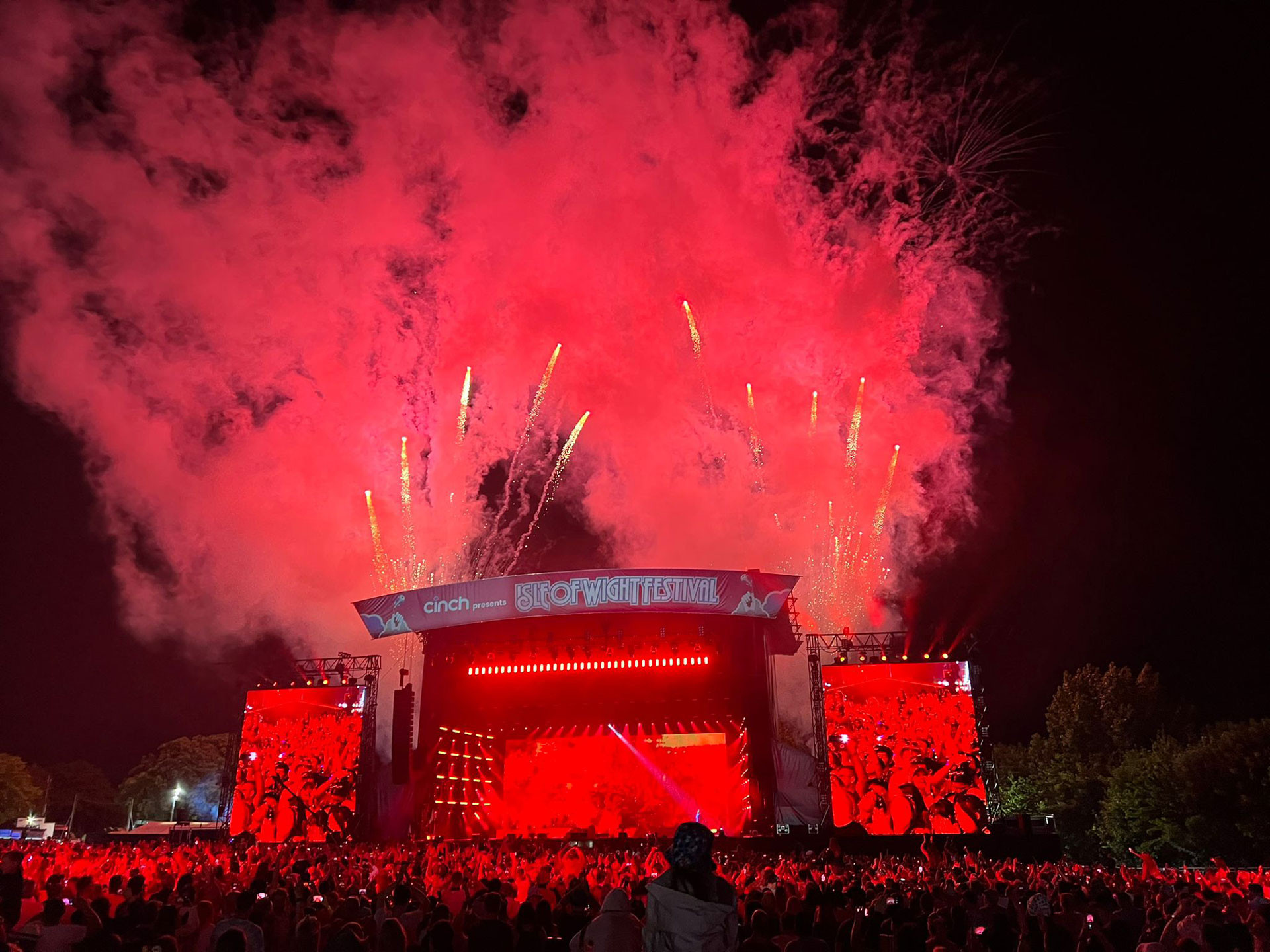 Arena and festival live music audiences of tens of thousands have high expectations for a memorable, professional and fault-free performance. The stage performance emulating, or even improving upon, the performance on the album – plus all the extra razzmatazz, visuals and, of course, atmosphere of sharing this with thousands of other, hopefully, like-minded fans. The stakes are high. Consequently, the touring live music industry invests heavily in the technology and equipment to deliver a sound and visual experience of the very highest possible standard. However, experience has proven that the worst can and does happen, so touring systems also incorporate the resilience and protections against hardware, software and artistic faults and errors. As well as dual-redundant system design for the main sound and visual systems, the same levels of protection are applied to the performance systems with dualled keyboard electronics, guitar pedalboards and playback for effects, musical fills and elements that are just not practical or financially viable to take on tour. Afterall, it’s well known that string-sections do not take well to sleeping on tour buses!
So, when the Lewis Capaldi tour was filling up with dates after the hard stop forced by the pandemic, and with a schedule that was likely to run until 2024, Paul Docherty, playback engineer for the tour, was picking his weapons of choice in his battle against the unexpected. “My main goal was to have redundancy for both backing tracks and keys on the input side” comments Paul while finishing the preparation of the racks “and, based on my experience on previous pop tours, I wanted a system which also offered conversion to different digital and analog outputs. You could be at a festival or at a stadium one day, and at a radio station the next day. So in my head I was thinking, I want a sort of Swiss Army knife…” Paul, a longtime DirectOut user since the early days of the ubiquitous ANDIAMO converter and the EXBOX.BLDS, which introduced the first truly automatic and transparent changeover between the two sources of a redundant playback system. Since when, Paul has also used DirectOut’s EXBOX.MD as a redundancy switch when Dante audio networking was required. 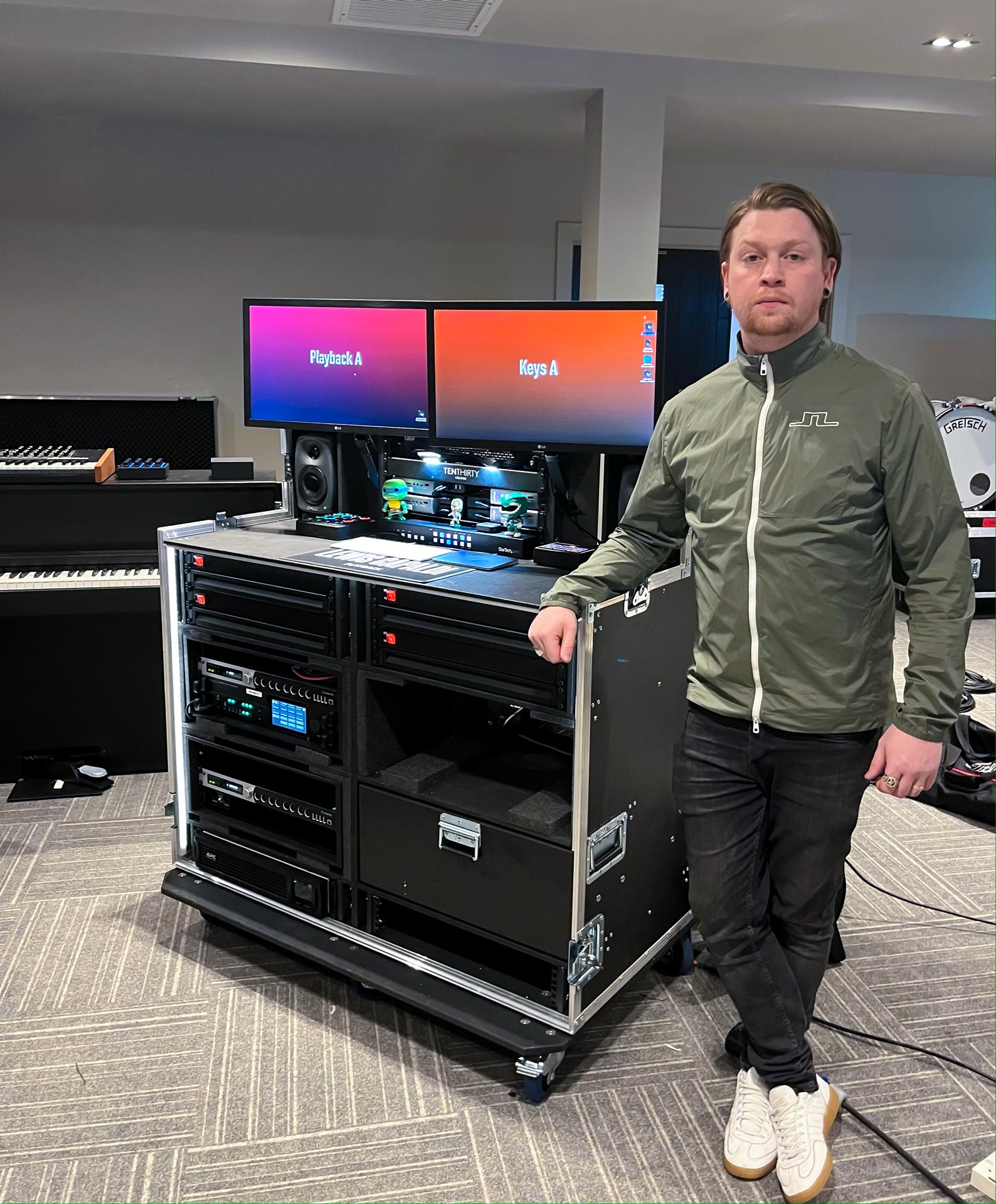 The EXBOX.BLDS and EXBOX.MD were the first two members of a group of products, due to be expanded to thirteen this summer, equipped with DirectOut’s transparent auto-changeover technology – more recently christened EARS™ (Enhanced Automatic Redundancy Switching). EARS™, which has probably secured the playback for many hundreds, if not thousands of concerts, festivals and events, is a system that prevents interruption of the output signal due to computer audio software or hardware glitches. EARS™ monitors the condition of a trigger signal on one channel of both multi-channel inputs and, in the event of a fault or error, switches automatically, instantly (within a sample) and so transparently to the backup connection. Paul’s initial plans were therefore to follow the usual route of using two EXBOX.MD Dante-to-Madi interfaces combined with a couple of AD/DA converters to get the job done for Lewis Capaldi’s tour. With 32 Dante channels for backing tracks and 32 more for the keys, the initial setup would have worked with two EXBOX.MDs managing 32 main and 32 backup channels each, and external AD/DA interfaces handling the conversion. The insurmountable problems were, however, the size and the weight.

You could be at a festival or at a stadium one day, and at a radio station the next day. So in my head I was thinking, I want a sort of Swiss Army knife…
Paul Docherty

“It was a lot of rack-space. More than I had available. There would have been two 4RU racks: one for playback, one for keys. Not to mention the quantity of external in-line PSUs. Then DirectOut turned my attention to PRODIGY.MP, but I had only ever seen it as a tool for processing, PA tuning, recording or things like that.” 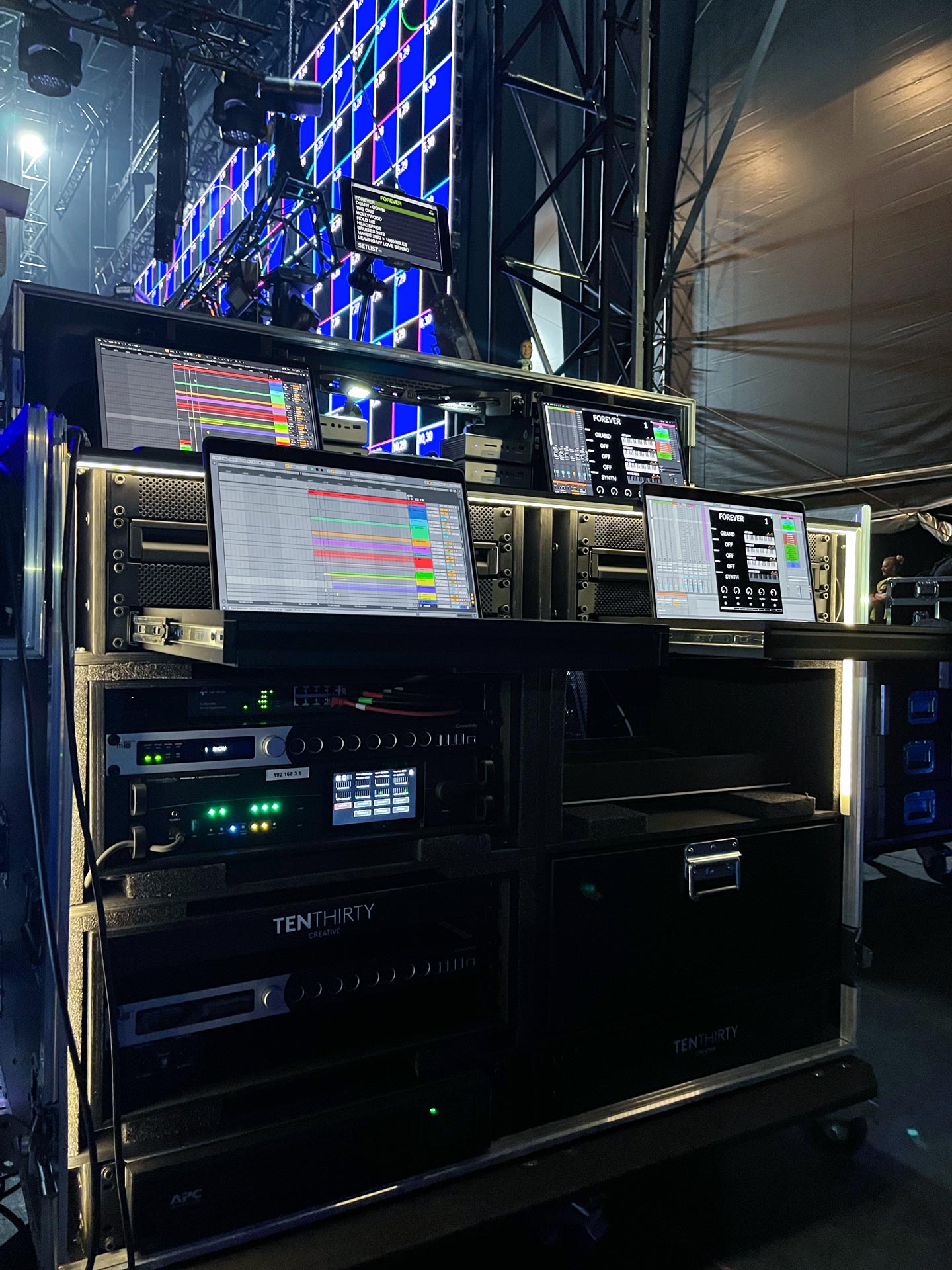 However, the DirectOut PRODIGY.MP proved to be an all-in-one 2RU device that fulfilled his playback rig’s total redundancy requirements for two complete sets of auto-changeover, routing and conversion.

DirectOut PRODIGY is a fully modular device which allows great flexibility in terms of supporting different audio formats, and crucially also includes the previously mentioned EARS™ technology. PRODIGY.MP simultaneously accepts two audio networking modules, two Madi modules and up to 32 channels of analog or AES3 local I/O. Adopting a single PRODIGY.MP equipped with two DANTE.IO modules gave Paul the possibility of cutting down rack-space, but still covering the total quantity of Dante channels he needed; and, in the same device, all the analog and Madi outputs required. All with just two standard IEC power connections!

“I could have two Dante modules, which would provide 32 channels each for two separate redundancies. I could have 32 channels with redundancy for tracks on one Dante module, and another 32 redundant channels for instruments on the second module,” comments Paul. “Along with that, I could have my choice of outputs, whether they would be Madi (BNC and SC fibre) and analogue… the options were endless. And all of it in this one 2U rack.”

I'm cutting down not only the rack size for when we have a full truck production, but the same size works perfectly for my flying rig!

Lewis Capaldi’s production decided to invest in three PRODIGY.MP units for the playback rigs and recently added a fourth equipped with Madi and SoundGrid modules to place at FOH and provide 64 channel Madi to SoundGrid conversion for recording and virtual sound-checks. “The A rig and the B rig for playbacks are fully racked in a rolling truck system, mainly for Stadiums and Arenas, travelling on the trucks; while the C rig will always be carried by me, which we like to call the floater system” adds Paul. “The fact that I can fit it in a Peli case is perfect. That’s basically what I use during a pre-show or straight after a show, or if we need to go for radio or TV or whatever”.

And in Paul’s opinion, this new way of looking at PRODIGY.MP could really set a standard in playback rigs: “I do think that playback techs will start looking at a system like the PRODIGY to travel with. You can have it in a 2U rack and a Peli case and have it as hand-carry on a commercial airliner if needed. And I think that, under the usual budgetary restraints, I would be doing the same and just taking it everywhere with me.”

DirectOut PRODIGYs not only offer hardware modularity, but also employ a software license model for the scope of functionality provided by each unit, to match every production’s needs and budget. In the case of these playback rigs, Paul decided to go for the PRODIGY.MP Essential System License, which leaves out all the DSP. This cuts down the costs, but still includes all the switching and resilience features for his playback systems.

“I bought the license without DSP because all the mixing and everything like that is taken care of by the audio world. I couldn't really see any need for me to use DSP from where I am as a playback engineer. But I can always go back, and update it, if I need to.” 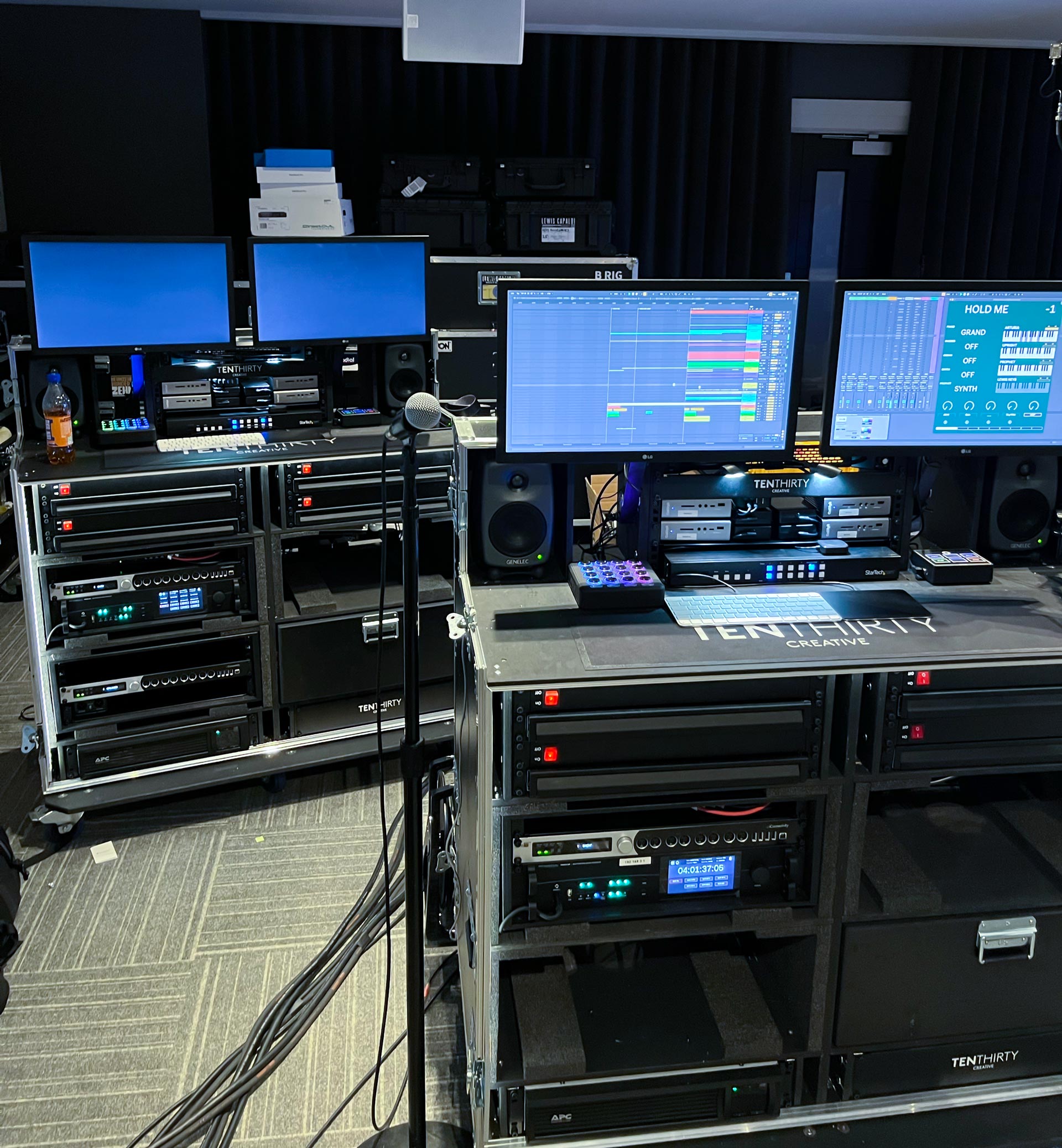 One of the features included in the PRODIGY.MP Essential that further convinced Paul to choose it for his playback rigs is the FastSRC™, which provides low-latency sample rate conversion, if needed, on all Madi and Audio Network I/Os. “And again, going back to the reason why I chose the PRODIGY… it's ok for us to be told at the start of a touring campaign, that we're always going to be traveling with the same audio package. So we don't have to worry about sample rate issues. But who knows, I may have to take this to a radio station, or a TV station, or on a show where I'm not afforded that comfort. With PRODIGY I'll be able to call ‘Internal’ if I have to. All those worries, at least, I know are covered by the PRODIGY, which is great!” Last, but not least, another aspect which led Paul to making his decision was the relationship and support received by DirectOut.

I think what's been important for me is that people at DirectOut are very open to listening to our thoughts on how a system is operating and how it could potentially be better. Not a lot of companies will take that on board and then actually develop it. One thing about DirectOut that really impresses me is that this does actually happen.